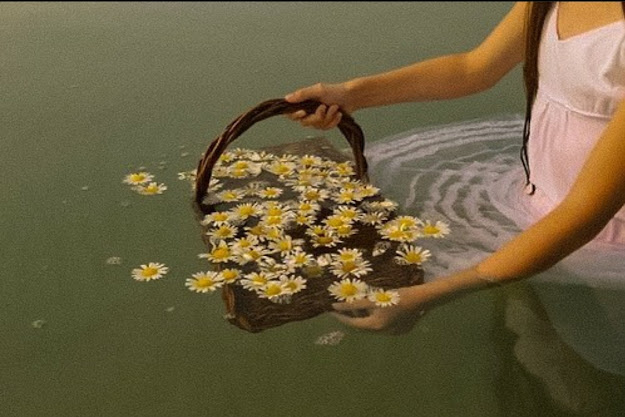 When water develops a taste

And loose hair starts to strangulate,

You become a question that no one posed

And sanding off the “bad” edges of your brain is how it goes,

"Cars are in the air now", are these really my words?

But for mine I am a connoisseur while for them I, closed eyes, carry flowers.

Like trying to draw pointless triangles and rearranging shards of glass,

Ink-less pages gnaw at me, “Have you run out of thoughts?”, I think.

"Let the sweet ease in your mouth”, I hear as I bite and finish it off in one blink.

These days of clenched jaws and stomachs with pits

and all I get is how I grew up in just a few days.

‘I’m well thank you', because everything seems perfect from afar.

Next to the fogged-up windows inside my head, lies a little wooden chest. It’s filled up to the brim with what one would regard as creative concepts, and, more often than not, it instructs me to make use of one. But what it does not realize is that the themes and ideas aren’t awake, they remain covered under heavy quilts of doubts and reservations, so, they hide in the warmth of their beds. Perhaps it’s time to awake them, or else they will be forgotten forever.

Hi, I’m an undergrad and I miss the feeling of being thirteen and frantically finishing a book in less than a day. I miss how I’d be so engrossed in reading, that hair falling on the pages of my book would remain unnoticed. I miss how the cup of tea, on the table, would once again go cold as I’d turn page after page. I miss how my eyes would close softly as I’d stay late and then finally feeling a smile on my face when I’d go to sleep, waiting for dark, soft dreams to reach my mind. I think about it a lot these days, while finding it hard to finish reading even a small passage without getting distracted or feeling fazed.

But even with hope and faith, it soon becomes challenging to come up with newer ideas. I tried thinking of novel perceptions and laid in the forest of my mind, while convincing myself that it would be “just for five minutes”. I closed those eyes but when I opened them- the tiny saplings around me had grown massive and the ponds had dried up, I heard the trees whisper that I had been gone for too long. And that’s when I believed, for a long time, that all the best ideas had already been thought of and been worked upon and maybe there isn’t anything new, I can come up with.

So, cherish your metaphors and treasure them as they’re yours and always will be. And do not worry about finding your magnum opus for there’s a reward after finishing every piece, the enormous prize here is that you have created something and that I think is as good as it gets.
at July 14, 2020 4 comments: